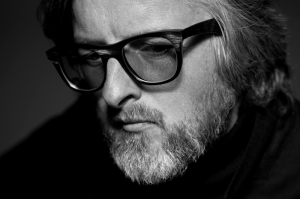 Though the 40-something year old Dutch eyewear designer might not be a household name yet, he has managed to make a pretty good name for himself in the fashion industry nonetheless. He was nominated for the prestigious Silmo d’Or prize, the eyewear equivalent of the Oscars, and Vogue named him one of the most promising designers of the future. His couture-like creations are not only appreciated by global superstars such as David Lynch, Rihanna and the one and only Kate Moss, but also critically acclaimed because of their infinite quality and craftsmanship. Naturally, we jumped at the chance to meet this mad hatter of eyewear.

There’s no denying his imminent presence when he comes to greet us in a voice that’s both a mixture of hoarse as husky. Wearing a sharp suit, and a beard which can only be described as lush, his dapper dandy-like appearance makes him stand out from the crowd without trying. We ask him to start from the beginning.
Ralph: “Well, before I started my career as an eyewear designer in 2006, I worked as a legal advisor and process manager for the government in terms of public administration for over 15 years. Quite a different path, but one I chose because of the stability it provided, that’s how I was raised after all. Though I’ve always had these creative inclinations,  I just figured I was not up to par compared to my friends attending art academies, told myself it was more their thing. However, I don’t regret that decision by any means. My years of experience at the government have brought me to where I am today and have helped me to think in terms of processes, solutions and certainly efficiency. Life is a large collection of many, and all kinds of different, processes; whether it’s designing a collection, creating a brand or even more banal things such as preparing a meal, doing the laundry or even setting up this interview. Plus, I’ve learnt to always think in terms of steps. When should a new one be made so that others are not delayed? My career at the Dutch government has also made me understand that things take time and good things sometimes take longer. Like a fine wine. Being able to put things in perspective on a daily basis has made me realize how fleeting success can be. But, to get back to the question, it all started when one day I was looking for new frames for my eyeglasses, but I couldn’t really find exactly what I was looking for. An optician told me he knew of a small atelier, able to produce a single set of frames, and asked me to draw the requested shape. Since I was already looking for a career change, this felt like the opportunity I’d waited for. Why produce one set of single frames merely for my personal use? Why not produce an entire collection? That’s when I quit my job and started my career as an eyewear designer.”

And successfully so, because ever since that first collection, celebrities have been knocking on Ralph’s door which, he tentatively admits, he is quite selective about. What’s the secret behind his success? “Essentially my designs are all unique pieces, one of a kind and made from the absolute finest materials, such as buffalo horn. I like working with traditional, historic elements with a more modern look. Furthermore, I believe that you have to do what you love and do it with conviction passion and originality. Be authentic, because that will eventually set you apart. I don’t have a big, fancy strategic marketing plan that tells me what my next move should be, I work at my own pace and base my decisions on what I feel is best. The only branding strategy I had, was to get my eyewear in premium stores, Collete in Paris being the first one. And I did want some strong personalities to wear my designs. My campaign shoots turned out to be quite provocative and generated a lot of buzz, but that wasn’t a preconceived idea at all. I just shot what I wanted to shoot. I am, or at least I believe I am, authentic in the way I present my brand ánd myself. I’d like to think of myself as my own business card, a visual extension of the brand Ralph Vaessen. You have some designers claiming the product should speak for itself  and they want to be left alone, shun all forms of publicity. But I don’t believe in this approach, at least not for my brand. At the same time, I know too well I can’t take myself too seriously. Which I don’t;  humor is an unconscious part of my work ethos. I also hardly ever attend a fashion party, I’d much rather be by myself or amongst close friends.”

That’s exactly what his demeanor is, remarkably laidback and easy to talk to. But then again, how can you not be charmed by someone who speaks so passionately about his profession, or his unbridled enthusiasm for that matter? He continues speaking about where he draws his inspiration from, as we silently listen in awe. “I get inspired when I go abroad and look around me to see what’s happening or going on. The British indie music scene has always played a big part in my life. You could say it all started in 1979 being sat in front of the TV, watching the music video Gangsters by The Specials. After it came on, I realized this was it, this was my kind of music and how I wanted to look. So that pretty much influenced my style and aesthetic for years to come. Even today, I’m still very much indie minded and listen to bands like The Raveonettes, Blonde Redhead, Interpol and Savages. I gather bits and pieces in my brain ,this could be a particular era or a timeframe or even a rehashing of previously shelved ideas, and that becomes the catalyst for a collection. Inspiration is everywhere and so it is not that odd when designers are inspired by similar things or recycle certain ideas, it’s the spirit of the times; a slice of Zeitgeist. Overall, I design from a wearable point of view, no pun intended, it’s what my clients expect from me after all, but that doesn’t mean there isn’t any room for experimentation. I’d say out of 10 designs, 8 would be commercially interesting whereas the other 2 would serve a more theatrical purpose. I really consider myself more of a creative director, or even just a creative businessman, rather than a designer. I know that branding makes up for 80% of the success, opposed to the 20% regarding the product. What I don’t know all about, are the more technical aspects when it comes to creating the product. I leave that to the atelier, as they are the absolute best when it comes to working with genuine horn eyewear. I do push their limits with my ignorance, asking them for particular color combinations, material usage, or even a more difficult craftsmanship. They experience my requests as challenges, because I ask them to do things they never did before, or deemed impossible. But because of that, we develop new things all the time.”

Besides the occasional superstar, who exactly is the aforementioned Ralph Vaessen client?  His shades have graced the pages of Russian Vogue multiple times and so they’re bound to end up with someone with an inimitable sense of style. Ralph chuckles before answering.
Ralph: “As my designs are unique pieces, and made from the best possible materials and made by the best craftsmen, it’s not surprising a majority of my clients are quite affluent. In fact, it has happened more than once that someone actually flew in from Moscow or Paris just to get their hands on one of my specs. Incredible, no? I’m very proud to be sold in the most exclusive and leading stores like Tsum, Colette, L’Éclaireur, and Barney’s  New York. Subsequently, almost half of my collection in Paris or Italy is shipped off to Russia. I have no real desire to create a lower priced range of eyewear, though I have given it some thought in the past, only if it would be under a different name or label, as I would not want to diminish the level of exclusivity of the main line. Furthermore, I don’t really believe in online sales, at least not when it comes to my brand, therefore I focus mostly on the offline point of sales. It all has to do with experiencing the product in all its glory.” 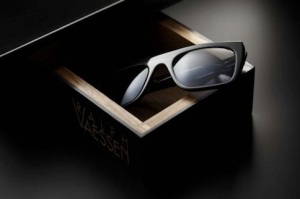 And glorious they are indeed. Ralph informs us that the design cycle is about the same as in retail, taking up to almost 9 months from sketch to sample. Hence he only produces a collection twice a year, at most. This is also due to the fact that his products are less trend-sensitive and season-bound, and more timeless and transitional. After all, an optician is able to sell the same model up to 2 years after its initial release, something which clothes are far less likely to achieve. Ralph: “The way my designs are built up, is to increase the level of durability. I believe a lot of designers are too preoccupied with the production side of sustainability. I think the lifespan of a product makes it sustainable, rather than the way it’s been produced. And I do recycle natural materials, the horn used in my designs is simply waste from nature. But I don’t put attention to it by using it as a marketing tool, as I question the integrity of the contemporary sustainability marketing hype of most brands, and I certainly don’t want to be associated with them. The coat I had on earlier for example is bought way before the euro was introduced and the suit I’m wearing now has been over 8 years old.”

“I’ve been quite busy with the collection I launched in Italy in March, which was a lot more 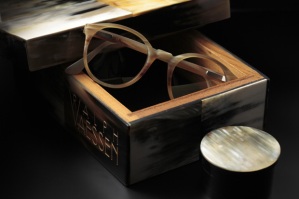 experimental in terms of shape and form. And then there’s SS/2014, which I’m currently working on to launch in Paris in September. There, I will also present the pair of frames I designed together with award winning Dutch designer Conny Groenewegen.  For the future? Even though my brand is expanding in terms of sales, I prefer to remain a small company in order to be in complete control. Because of its size, I’m able to avoid time spent on work transferring and work monitoring, instead of being effectively at work myself. There is an old Jewish saying that goes: I wish you a lot of employees. A cynical thing to say when you want to wish someone bad luck. I outsourced the production, distribution and sales side of the business. A conscious choice I made to fully focus on the design and branding aspects of the company. The fun things. No paperwork, no financial administration and no logistic issues. Of course I‘m monitoring the overall progress and quality of my glasses, but luckily, I’ve been able to build up a tight-knit team of people around me, which makes it easier to communicate in shorthand and focus on the job at hand. I also prefer long term relationship as this benefits the creative process. You’re able to develop more substantial and in depth connections with one another. I always work with the same photographer for instance, despite the many offers I get. In fact, we just came up with the latest campaign after a few bottles of wine last night.”

“People always ask me if I ever feel like branching out, and of course I have, but not if it means compromising what I’ve so carefully built up over the years. All I know is that if I do decide to create something other than eyewear, it has to be something I can totally commit to. I don’t do things halfheartedly.”