With the arrival of Amsterdam’s very own photographic fair UNSEEN, I took it upon myself to reread Sontag’s insightful collection of essays on the matter. My introduction to, and affinity for, photography has been awakened mainly by fashion photography. As a young boy, flipping through magazines, this alternate planet seemed to capture a perfect moment in time. What is it with photographs that make them universally accepted, unequivocally present?  The 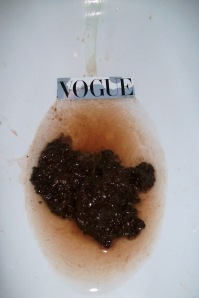 only sense you need is sight and thus making it an highly accessible form of art, to many people around us. For me personally, being the glass half empty kinda guy, I have had issues capturing something photographically since I was about 16. Whereas most people can look at an image, full of nostalgia, and reminisce about what was, I on the other hand can feel slightly depressed looking at images of unforgettable nights; they can, and never will be, measured up to. The photo is the absolute truth, providing you with evidence of something occurring. Without the tangible proof of that slice of time, the only thing that remains is a hazy memory which will only confirm it was a great night, but will not slap you around the face to say: ‘You know what, this was such a great freaking party. Nothing will ever come close to the feeling you had that night, so there, take that, in your face’. Thus, for the same reason, you will hardly find any pictures of me after that particular age. Has that got to do with avoiding confirmation? For example,  nobody will be able to say: ‘You’ve never looked better there’. Or worse. Or even, ‘you look so different’. If so, it has everything to do with the way I see myself in my head and the actual representation of me, if there is even such a thing. This led me to think more about the predatory and beautifying effect of photography.

Closely linked to (fashion) photography are models and after finishing Sontag’s insightful essays it began to dawn on me why these girls are being photographed by a Polaroid camera when they are first plucked off the street. The image will show the girl in its most pure form, yet shot through the most  ‘ugly’ way possible; harsh lighting etc. Only if her features survive what the Polaroid picture does to her, will she get the chance to actually call herself a model. Which is an odd thing, because she will be replaced by heavily made-up and computer enhanced model-like creatures; she will not look anything like the way they initially found her. Her hyper-real self becomes the norm.  If there is truth-telling in photography, like Sontag claims, does this mean the Polaroid is closer near the truth or is it just an awful liar? This brings me to an avid user of the Polaroid and another one of my fascinations: Guy Bourdin. Maybe the fact that he used the truth-telling machine for his grotesque and ‘fake’ images is what made his work so strong. Exactly like Edward Steichen did when he took the image of the milk bottle on the tenement escape. Before that, no one had ever thought something so mundane could be worth photographing.  When Guy Bourdin took something like fashion photography, which in itself is an idolizing and beautifying genre, and combined it with the ‘gritty’, ‘real’ aesthetic of the Polaroid, he placed it out of context and pushed the boundaries for photography even further. In a way, he’s not too different from someone like Diane Arbus. How she photographed her subjects, void from judgment, is exactly the opposite of how they were seen and treated by the public. The fact that her eccentric photographic topics are faced to the camera, full frontally, shows a clear 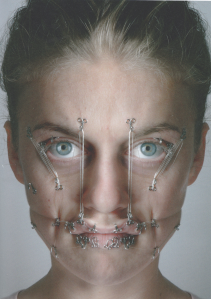 intimacy between subject and photographer. Which is interesting since this full frontality in images often strengthen the predatory effect of the camera. Just think of the passport pictures or other images of official documents; clear and strict guidelines, no room for improvisation. Stripped back from all glamour and technique, this again reminds me of the Polaroid images taken from models at the beginning of their “career”. Standing in front of the camera, often holding up their measurements the way inmates hold up their sheet of misdemeanors , you can’t get any more up close and personal than that, a violation of keeping one at arms’ length.  What I find intriguing about this ‘breach of privacy, if such a thing can ever be fully captured on film, is what happens if you are confronted with your own representation, or someone else’s representation of you for that matter, on a constant base?  Does the model I discussed earlier above will be able to recognize herself in her own hyper-reality? Or does she adapt to that representation, slowly leaving behind what actually made her photographically interesting to begin with?

“I think i’m ready for my close up”

Britney Spears in ‘Kill the Lights’

Personally, I do think the difference between one’s own representation and the actual end-result can have self-destructing effects. Would Britney have lost it had she been an ordinary elementary teacher? If not, and let’s assume this is true, it is probable that Ms. Spears started to put her hyper-real self on a pedestal. If this flawless, picture perfect Pop Princess becomes something to live up to, one can only imagine how much of a disillusion this can cause in one’s sense of self. That gives a double meaning when Susan Sontag mentions  that the mere act of photography is one of non-intervention; prolonging the moment that is captured. It almost 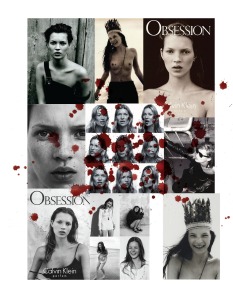 makes the photographer the perpetrator, its subject the victim of whatever the viewer wants to see, or keep seeing. But there are also examples of a society being the victim, or at least disillusioned. What about that time Kate Moss was snapped snorting coke? Of course the nature of the image, taken with a mobile phone, added to the ‘peeping’ feeling. Outraged, the world demanded an explanation from the model with myth-like proportions. This was not the creature they created! Would the same thing have happened, had it been an editorial photo-shoot by Vogue Italia’s master Meisel?  Undoubtedly it would have generated an extreme buzz and even more negative responses and insinuations of provocation, but Ms. Moss would probably also be applauded for her courageous commentary on the fashion industry. Does this say something about the development of photography, or of a society? One would be inclined to agree on the latter, since it is the outside world that isn’t satisfied anymore with a photo as absolute truth or proof. It needs more and it will only want more.