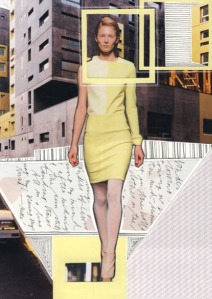 Daniel Lierah And Arturo Martinez established their Paris based studio in 2010, after which they commenced on a design project in women’s ready to wear.  Their Latin roots, juxtaposed against a sober Parisian environment, makes up for an interesting and eclectic balance between structure and fluidity, and this is exactly what the core is of their design ideology; marrying the improbable and finding beauty in the odd. Through thoughts and feelings, the designers experiment with unconventional fabrics and silhouettes, questioning the expected and daring the unknown. With a strong background in footwear , Martinez Lierah has managed to combine their artisanal approach to design, with clean, architectural cuts and dashes of vibrant colors. Prestage sat down with the dynamic duo to discuss their past, present, as well as their exciting future.

“To be honest, we never expected to create a brand together. We just happened to both  attend the IFM in Paris, doing a postgraduate in Fashion Design, when we started hanging out. Back then, our individual styles were polar opposites of each other, one more feminine and colorful, while the other was more masculine, working with shades of grey. It wasn’t until we both resided in Spain, where both of our families live, that we decided to create a few looks together from some leftover fabrics. The end results surpassed our expectations and we decided to try and sell them at the French fair in Tranoiï, which worked out really well. We’ve been partners ever since and currently working on our fifth collection.”

“Designing a collection usually starts with something that grabs our attention, which can range from an image and a piece of art, to a person crossing the street. We analyze these findings and translate them into shapes and colors, while at the same time trying to maintain our sense of style as much as possible. Our AW13-14 collection for example, is inspired by the work of sculptress Berlinde de Bruyckere and the bunkers of Cabourg. The idea of physically moving a person without their consent, only to develop an extraordinarily rare relationships with its captor, often denominated as Stockholm Syndrom, is endlessly fascinating. We’ve studied this paradoxical love story and focused on the positive aspect of this phenomenon, to try and capture the intense and fragile moment  when two people become one, and the captor becomes a symbol of hope.

“With materials like neoprene, neon crèpe and exclusively designed wools, as well as working with laser cutting, we’ve managed to create our raw, yet subtle, signature look. However, we do not design with a specific woman in mind. Instead, we’d like to think our customer has an intellectual state of mind, yet is still feminine in her way of dressing. A woman who appreciates detail and finds beauty in the most unlikely of places.”

“And although the process we go through to get to a final result can be called artistic, we would never dare call ourselves artists, we have too much respect for artists and architects to call ourselves that. Instead, we like to refer to ourselves as Product Designers. However, if we were to pick anyone to collaborate with, we’d probably go for Rem Koolhaas, as we love what he does professionally. Or, in the case of a deceased artist, Gaudi. We would most definitely collaborate on a shoe design with this iconic figure, fusing some of his organic forms and choice of color with our more architectural aesthetic.”

“Speaking of which, there are quite a few differences in designing a shoe and a piece of clothing. The design and manufacturing of footwear is extremely difficult, compared to designing and constructing a garment, as we are dependent on many different manufacturers to make our prototypes and productions. We can’t ask every single factory to keep doing things over again, though we’ve been very lucky with the Spanish shoe factories that have supported us over the past years. Designing footwear is highly technical, the technical drawing sometimes looks more like an industrial designer’s research sketch. As for the future, in 20 years from now, we’d like to continue what we’re doing, still as much enjoying it as we do now. We have both worked for several brands in Paris, but it is still the greatest achievement so far, to be working on our own brand. I believe one of the reasons which makes us the perfect partners in crime, is our ability to have a good time and find joy while creating. It never feels like work”.